One of the things we use for scenario inspiration for our Battlegroup (BG) games is Advanced Squad Leader (ASL) scenarios. This game was inspired by ASL scenario AP1, The Ring. ASL is a game I have collected for many years but never really played. The historical feel, the narratives of the before and after have always added a historical feel that we enjoy but the counters and abbreviations don’t give us the flavor we enjoy. Oh, the abbreviations.

Using the Fall of the Reich Battlegroup (FotR) Battlegroup book I converted the ASL force list to Battlegroup. The process is fairly fast and I start out by counting up the total number of Multiman Counters (MMC). Once I have a total I size of the game I make sure it will fit within BG scope, which is about two or three platoons. Then I fit the MMC into infantry platoons, so if the Russian have 40, I divide by four so ten platoons. That is way too many for a decent BG game so In this instance the Russians started with three platoons of veteran engineers. Tanks are one for one and BG doesn’t have problems handling dozens of AFVs.

From there I set up the Germans; since they are the defender they have fewer points than the Russians so they had two platoons, foxholes and the Panther.

After I have both sides set up, I point them out and add up the battle Rating (BR) to check to see if the game is balanced or unbalanced as desired and within a size we can finish.

This game was fun, as always when I set up scenarios like this I have a vison as to who should be the winner. In this case it was the Soviets; they had close to 20 tanks and two full strength infantry companies along with plenty of support. The Germans did have the Panther and they were facing T-34s. I was thinking with clever placement and some good luck the Germans could cause some serious problems for the Russian.

The game didn’t go as planned initially, the Red infantry did storm the German lines and the T-34s blasted away but the Germans held out.. It wasn’t until a breakdown chit was drawn and dropped on the Panther was the German defenders fates sealed. 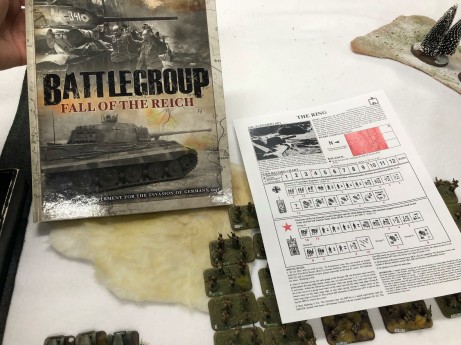 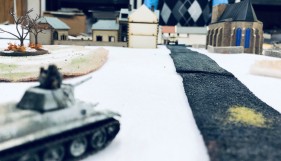